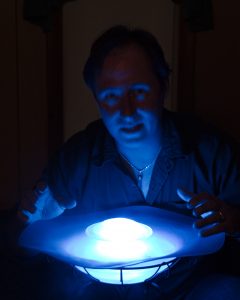 I hope you’re enjoying this series on improving your manifestation ability.

In my last post, I covered some of the more basic uses for symbols.

When you have practiced the core process to the point where you can relax deeply at will, focus your mind completely on a particular outcome, and trust that it will actually happen, you can achieve some amazing results.

And yes, it’s totally fair to call this magick, even though you and I know this to be based on scientific principles.

The use of symbols in this process goes back further than recorded history.

For example, the old legends of witches mixing weird ingredients into a caldron while speaking incantations is an example of using symbols to manifest a desired result.

There’s no real power in the ingredients or the incantations, other than the result of eliciting certain thoughts and feelings within the manifestor.

As long as the one performing the ritual has faith in it (i.e. – trusts that it will work), and they also have a strong connection to the Divine Essence within, then it will work.

These days, you’re more likely to see someone burning a green candle to attract more money, or wearing a particular type of crystal as jewelry for more vibrant health.

Many years ago, I read a book called “David St. Clair’s Lessons in Instant ESP“.

In that book, he describes a process of using symbols to “cast a spell” and manifest a desired result.

The idea was to draw out a pentagram (5-pointed star) and within each arm of the star, draw symbols to represent various aspects of your desire.

These symbols should be secretive and things only you would understand.

On one arm of the star, draw one of more symbols to represent WHAT is to be manifested.

On another arm, place a symbol to represent who is to receive the result.

On a third arm, a symbol to represent WHEN the manifestation should happen.

On a fourth arm, a symbol to represent WHERE the manifestation should be experienced.

And on the last arm, a symbol to represent WHY you want this to happen.

Once this is done, the instructions were to hang the drawing somewhere you would see it often.

When you have lived with this for a period of time and feel 100% ready to “cast the spell”, a ritual is performed where you physically touch each symbol in turn as you speak aloud (in a firm voice) what you want to manifest, with all the details included.

After the ritual, the drawing is trash, and is to be discarded. Keeping it around would potentially contaminate the energy directed towards your goal.

I tried this a few times, and to be completely honest, I felt silly doing it.

I obviously didn’t have a lot of faith in the process, and my lack of trust prevented it from working.

However, it did give me an idea, which I used to great effect.

Having studied astrology for many years, I drew up a chart, placing the symbols for each sign and planet in a way that represented the character and nature of what I wanted to manifest.

I hung the finished drawing on a wall of my home, where I could see it often.

Because I knew what the symbols represented, and the drawing as a whole reminded me of what I was focused on manifesting, it did help me focus on the end result.

Each time I did this, I noticed that the direction of my life led me to experience the essence of what I wanted, even if it wasn’t in the specific form I had originally envisioned.

To a large degree, this is exactly what I described in my last post about executives decorating their offices with portraits and awards to help them focus on the success they desire.

The point of all this is that symbols can be used as a focal point upon which to focus your mental energies.

And as long as you trust that your continual focus on the end result will cause it to manifest, that’s exactly what will happen.

I’m also saying that a focused effort of mind will be more effective than general thoughts along a general direction.

In my original “Keys To Power – Step by Step” course, I called this the Law of Invocation.

You can make this much more effective by entering a deeply relaxed state of mind and daydreaming that you are involved in a powerful ritual where magick is being performed to manifest your desires.

In this, you don’t even have to be the one doing the magic. You could imagine that angels, saints, or even nature spirits are doing it for you.

In many respects, this is how most folks approach prayer. They are asking for some higher being to perform the magick for them.

When you really study all forms of manifestation, you start to see how many different things are essentially different versions of the same thing.

And when you see this, you are in a better position to take greater control over your life.

We’ll continue this discussion on symbols in my next post. In that post, I’ll talk about some of the dangers of focusing too much on symbols.

For now, feel free to play with symbols and bring a little magick into your life.

Just remember — it’s all based on faith.

If you believe in it, it works.

If you don’t believe, it doesn’t work.

And you can increase your faith by relaxing deeply, eliciting positive emotions, and imagining miracles in your life.

Until next time, have fun!