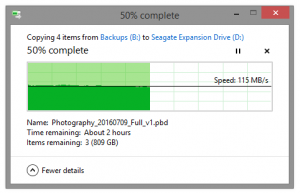 As an online publisher, I collect a fair amount of data over time, although it is nothing compared to the data collected from my photography / videography activities.

After 15 years of producing books, audio recordings, and a few videos, I can fit everything (including educational and software downloads) onto a 500GB hard drive, which is super-simple to back up for secure storage.

In just 5 years of photography & videography, I’ve already amassed well over 12 TERABYTES of data.  Now, granted, I could easily delete a fair share of that, since I tend to keep all my testing images as well as the stuff I actually want to keep.

Honestly, though, it’s a lot easier (and profitable) to just buy a new hard drive and keep going, rather than wade through mountains of material to determine what can stay and what can go.  A 4TB hard drive is around $100, and it would take a significant amount of time to “find” 4TB of space from deleting old files.

I spent a few hours yesterday researching my options for future storage and backups, and here’s what I found.  This isn’t meant to be an exhaustive analysis, just a quick report of the key points.

Most photographers / videographers are using systems with multiple hard drives in a RAID array to get massive storage that essentially backs itself up as you go.  While this isn’t “cheap”, there are some advantages of this.

As an alternative, an 8TB external hard drive can be purchased from Amazon.com for just $150, and 2 of these (one for data, the other as a backup) run less than $40 per TB.

So, as I see it, it’s a decision between whether you want everything in one system, or are comfortable managing multiple hard drives and making sure everything gets backed up on a regular basis.  Is it worth $250 to do it yourself, or would you rather have a system do it for you and spend the extra money?

With the RAID array, you’re stuck with the storage you started with, unless you want to add a completely separate unit.  But on the plus side, if a drive fails, all you need to do is replace it with a new one, and the system continues as if nothing happened.  With separate hard drives, you need to manually replace the data, either from the backup, or create a new backup from the source drive.

So the separate hard drive approach is more flexible, with a lower cost of entry, but requires more work to maintain.

For around $150, I can also get a 4-bay enclosure for the separate hard drives and good backup software to manage the regular backups for me.  So there isn’t a whole lot of time involved in management.  I’ve already got one enclosure and the backup software (ToDo Backup, by EaseUS), and adding another enclosure wouldn’t be too hard.

Another option here with 2 of these simple enclosures, is to fill both with cheaper, consumer-grade hard drives (like the ones I already have), and use one enclosure for data and the other for backup.  Since Windows makes it easy to treat multiple physical hard drives as a single logical drive, management becomes relatively easy, especially with the automated backup software I have.

The advantage here is that Windows makes it easy to add new drives to the system as I go, so I don’t have to start out with both enclosures full of drives.

Writing this blog post has helped me clarify my own mind on this, and I hoped it has helped you as well.

One thing I will add here is that while some photographers / videographers use online storage as part of their backup plan, I’ve passed on this idea for a couple of reasons, mainly cost and the time involved in uploading TERABYTES of data.  An average video job results in over 100GB of data, and that would take more than a day to upload.  (Max upload speed where I am is around 10Mbps, or about 3GB per hour.)

And yes, I realize I should have some form of off-site storage in place.  I guess I must like living dangerously.