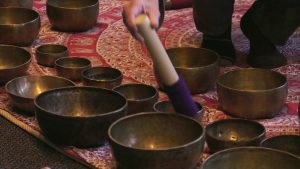 I was recently asked to record a concert given at the Coptic Center I’ve been working with a lot lately.  The concert was performed by Mark Handler, who may be found at http://www.tibetanbowls.org.

There were a couple of challenges in getting a good recording.  While the audio portion was relatively easy — a generally quiet audience and relatively loud sound source — most of the light came from the windows BEHIND the performer.  Luckily, I already knew about the other main challenge, which was that the opening presentation would have him standing, but he would be sitting for the main concert.

Having 3 cameras covering the event, I was free to be a little more creative with the main camera, knowing that the stationary camera would be getting a good image even if I messed something up.  The only time this became necessary was for a few seconds as I was adjusting focus.

Overall, I think the final recording came out just fine.  As with most video recordings, there’s lots of room for improvement, which could be implemented with more time in the editing phase.  With a larger budget, I could spend more time on this, but as it was, this came out to be a $350 video (personal use) or $700 for royalty-free commercial use.