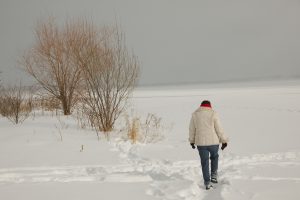 Since I last wrote, winter has hit Michigan.

Both last year and this year, the trees held on to their leaves until our first snow.

Actually, at the moment, we still have a few trees with green leaves on them.

I guess they are the ones ignoring physical reality and focusing on the type of weather they would rather have.

On one hand, this can be seen as an admirable persistence. Carrying on even when tangible evidence says it’s time to change with the season.

On the other hand, it’s also a message that nature ebbs and flows, and there are some things we all have to accept — eventually.

Being someone who is completely focused on making the universe conform to my vision, this isn’t something I think about often.

On some level, though, I recognize that it’s a LOT easier to run WITH the wind than run against it.

As an example, video rental stores found themselves in trouble with the popularity of Netflix and other online streaming services.

Photographers needed to become true artists instead of just skilled technicians once cameras became smart enough to set their own exposure and identify subjects to focus on.

Local stores are even starting to provide free delivery services to encourage folks to shop with them instead of the big online stores.

When you notice a trend happening in your field, it’s a good idea to adapt and thrive, once you understand the trend and where it’s going.

I can’t believe I’m saying this — I remember back when fax machines first came out and how expensive they were. (For those who don’t know what a fax machine is, think of cell phones instead.)

At the time, I didn’t see why anyone would spend that much money on such a thing, yet over time, I saw the businesses that embraced the new technology attracted more customers than those that held on to the old ways.

The same idea applies in personal situations too.

At one time, kids could do the dumbest things, grow out of it, and people would eventually forget the stupid stuff they did.

Nowadays, with so much getting posted to social media, that stuff will stick with you forever.

Those who get married soon find themselves with a different circle of friends. And when they have kids, it seems everything changes.

The point of all this is simple.

When you see the world around you changing, consider how you might want to change to get the most out of the new patterns.

Six years ago, my photography business started shifting away from still photography to video.

Yes, I could have stuck with still photography, but I’m really enjoying doing video, and it’s a lot more profitable.

In my online business, I’m starting to see a pattern where others who teach a subject are moving towards a “patronage” model, where the basic information is given away for free, but those who pay an ongoing monthly fee get little extras.

At the moment, I’m considering how I might best adapt to this new pattern.

I’m also seeing a pattern where paid courses are smaller, more tightly focused, and the larger courses are sold in pieces.

What patterns are shifting in your life?

How could you adapt to take advantage of them?

On a completely different topic, I’ll be doing a live workshop here in the Grand Rapids area.

The title is “Turning Lead into Gold: A Spiritual Transformation“, and it happens this Sunday.

I’m planning to record it and get it posted to YouTube next week.